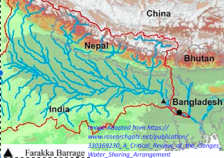 When our member Ms Sukla Gupta moved to Farakka with her husband, she found herself building a school. She invested it with love and compassion to raise a fine crop of graduating adults

The sleepy town of Farakka suddenly came alive when, in the early sixties, it became the site for a barrage. There was an influx of migrant labour and suppliers of all kinds. Ms Gupta’s husband had moved to Farakka as a contractor for the barrage. The administration must have realized that the place needed a school for the children of those who were arriving in various capacities around the massive construction.

Ms Gupta along with few others applied for the position of teachers and got selected after the interview. But where was the school building? Where were the students?  The government woke up to its task and constructed a building, where the school was started on March 5, 1964. Some 60 children, local and others of the barrage employees’ joined. The number increased as the school became a second home for the students, given the unique love and care of their teachers.

For Ms Gupta, it was time to shower on her students the same compassion and attention that she had received from her teachers at Shantiniketan. Children were to be nurtured and never punished and school took to the Shantiniketan path of learning. There was a period of great stress in the seventies and the children needed special nurturing.

Many of them are well settled in life today. By the time she retired the school was flourishing with 2,200 students.

Her point? Treating minor and major issues of the young generation with love and care is the best way to address them. If only the present generation started thinking this way!