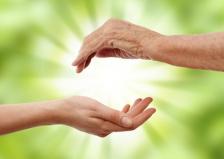 Aparajita Dutta, who describes herself as "an author by passion",  writes about how her uncle shaped her creativity and even the person she is today.

He smiled at me, rays of love, emanating from his phlegmatic face, a love which inspired me to paint my words in different languages. Like every Bengali child, I was acquainted with the book, Thakumar Jhuli, a collection of Bangla fairy tales. But for me, jyatha’s stories were much more interesting than the princes, Lal Kamal and Nil Kamal. He too had such princes, but I at that time, was too naive to understand the source of attraction. Later, as I look back, I find my own fantasies, embedded in them, as he coloured my childhood with imagination, embedding fables in my subconscious heart.

A bearded man, a smiling face, and a soul full of stories … that’s how I remember him, sitting on his chair, always going through one dictionary or the other. As I look at the dedication page of my own M.Phil thesis, I ponder: is this at all a worthy dedication to the man who shaped my childhood, who taught me to struggle in his most creative of ways and above all, who taught me to be passionate and shower love upon everyone? Perhaps, not. Perhaps it’s just a beginning to help him live when he left his physical body eight years back. I would not call it a luck but a blessing to have someone like my jyatha ( uncle) in my life who treated me like his own daughter, his ebullience, still wiping away my tears whenever I miss his presence. A hedgling in her sweet sixteen, I was too young when he left me alone in his books and creations for childhood memories are all I have now.

A poetry for an occasion, a story with characters who became my friends and role models… he would weave my childhood fantasies with values he wanted to imbibe in me, and carry forward when it would be time for him to leave this world. A translator and a writer, jyatha was just like another normal human being to me, always greeting me with a smile, an act I learnt as I grew up. The smile would be like his constant companion as I watched him working in the night before the publication of his books. The joy of working allured me, the mesmerising beauty of living the passion, to give the readers the best of oneself brightened his weary face as I looked with awe, hoping someday too, I will become a human being like him, and a writer perhaps. I don’t remember using the exact term ‘writer’, ‘translator’ or a ‘human being’ as a child.  I would rather say, ‘ ami jyathar moto hote chai’ ( I want to be like jyatha).  For me, he embodied a human being, a passionate translator and a writer.

Looking at the theories of translation in my M.Phil course work, I felt like I knew their essence a long ago, I understood what they meant even before I became aware of the existence of a whole field called ‘Translation Studies’.  Often as I would crawl up to him and demand to tell me what he was doing, jyatha would tell me about the mysteries of  languages he was working on, as he translated, instilling a love for knowing them and while I saw many of my convent educated snobbish friends bragging about not understanding Bangla, I read Bangla and English books extensively. Jyatha would allow me to discover the books by myself, letting me freely explore his collection, as if they were just mine.  Not for a single moment did he complain against the sorry state of translators and writers in India, not for a second did he make me feel that the struggle is futile; these are the things which I later learned, after I decided to find him in his works, in translation studies.

Growing up would have been different had it not been for the man who waved his wand of creativity and made even the hardest of philosophies easy to understand, from my love for pets which he nurtured by telling me stories of Joy Adamson and her pet lion, Elsa, to becoming a diligent woman, jyatha gave hues to my wings. Losing my way in the lanes of memories, I am reminded of a few beggars who would visit our house regularly and jyatha would offer them help, in cash or kind. Sufficing my curiosity, he would tell me about the abject poverty they live in, something which I still remember, something which inspired me to devote my free time in social work.

My life would have been different had he still been alive to see me following his path, with his ideals as weapons to fight against the odds. But am I too late to do anything for him?  My M.Phil thesis looks at me and strikes off the dilemma. Working on translation, fighting for translator’s rights, helping out people in whatever ways I can would have made him happy and perhaps he would have wanted this too… a better future for writers, translators and everyone, perhaps he would have wanted to see smiling faces of everyone around him. It’s not too late, after all. I look forward to my translation projects and the events of my NGOs. And when darkness falls, I look at the sky and find a smiling star. I know, he is there, watching. I know, a day will come when hundreds of people will say that I am his worthy niece. He’s alive, in his works, in my tributes!!