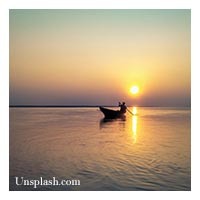 Guwahati, erstwhile Gauhati, where our member, Ms S. Bhowmik, lived with her husband, abounds in picturesque places that they loved to visit. This was the land of the mighty Brahmaputra where her husband was a professor of Biotechnology in Guwahati University and she was the Principal of CBSE Higher Secondary school. A visit from relatives meant a visit to these places. One such place was the Umananda Temple, dedicated to Lord Shiva, on the Peacock Island that lies in the middle of Brahmaputra. A haven for nature lovers, Umananda could be reached by car, up to the ferry ghat and then by country boats. The ferry ride is quite an experience because of the breathtaking view of the Brahmaputra.

The Peacock Island is the smallest inhabited riverine island in the world. The temple was built on the Bhasmacala mountain in 1694 A.D. by King Gadadhar Singha. It was destroyed by an earthquake in 1867 and rebuilt by a wealthy merchant. The rock-cut figures here show the intense masterly skill of Assamese craftsmen. Shiva apart, there are idols of 10 other Hindu Gods. “This serene environment makes one want to sit down for a while and absorb the beauty of the place,”, she said.

Another must visit place was to Basisthashram, reachable by car driving on the outskirts of the beautiful Garbhanga Reserve Forest. Basisthashram dates back to the Vedic age, a hermitage believed to have been built by the Sage Vasishtha at Sandhyachal, to pray to Lord Shiva. The original temple is in the cave and has a waterfall. Sage Vasishtha is said to have died at Basithashram, where lies his grave. The Saraighat Setu on the Brahmaputra, makes for another indelible memory.

(As told to Support Elders by our member.)