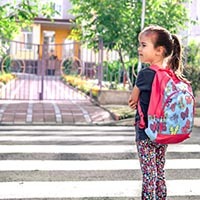 Our member Ms A Dasgupta was born in Dhaka, Sadarghat. Here she shares some fond memories of her childhood.

Ms A Dasgupta, who grew up in a joint family, was very attached to her father and uncle and used to accompany them everywhere—be it the large open terrace of their rented house, or to the school where her cousin sister studied.

Every night, her father took her to the open terrace and lying down on a mat, showed her the stars. He used to tell her stories about how they were named for easy identification. “I can still remember the wide and clear night sky with thousands of twinkling stars. I came to know about constellations like ‘Kalpurush’, ‘Saptarshi’ and their significant patterns. I have never seen such a wide expanse of clear sky after that”, she says.

She still cherishes the memory of accompanying her cousin sister to her school every day. The school, with its vast playground and the Buri Ganga river flowing nearby, made her look forward to dropping her cousin to school, along with her father or her uncle. When she secured admission in the same school as her cousin, she had thought that she would be sitting in the same classroom as her cousin. So, when she was taken to a different classroom, she was very upset. But the school knew just how to distract the little ones on the first day—they gave them beautiful gifts. “I still remember sister Vimla, who was my first class teacher. She came in carrying a bag full of beautiful dolls, which were popularly known as bileti doll (foreign doll) in those days and I immediately stopped crying and got busy playing with the dolls. She was one of my favourite teachers till I was there.”

There was a small room with colourful chairs and small tables for all the students to have lunch. A lady used to monitor the students when they had lunch. She used to ensure that decorum was maintained—for example, the students had to wipe their mouths properly after finishing the meal.

The watchful gatekeeper, who seemed like a giant to the tiny girls, was very strict and helped to maintain discipline. He did all his tasks very sincerely, starting from closing the gate once school started to ensuring that there was discipline in the playgrounds. One of the rules was that seniors and juniors were not allowed to play together. During playtime, for the first few days, Ms A Dasgupta, however, cleverly managed to run off to meet her sister, who used to play on a different playground. And much to her cousin’s embarrassment, Ms A Dasgupta would clutch her cousin’s dress and stand there all through playtime.

There was a church inside the school campus and Ms A Dasgupta still vividly remembers the thunderous sound of the big church bell in between and at the end of the school day. Another memory very close to her heart is that of fishermen’s boats sailing on the Buri Ganga river and their melodious songs, which she later came to know from her father as “Bhatiali songs”. The boats would be out of her sight, but the reverberating tune would keep the surroundings mesmerized.

“Where does the fisherman go, dad?" This simple question from a little girl would be accompanied by the common answer, "Grow up and you will come to know how the river meets the sea and the hard life of the fishermen, who risk their lives every day to earn their livelihood but still frame such wonderful lyrics with equally wonderful tunes.”

(As told to Support Elders by our member.)