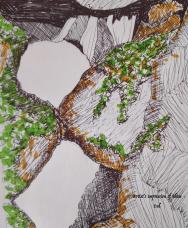 They are avid travellers; from Shopto Nadi to the 12 Jhotirlingas to the Grand Canyon,  Mr M. Bhattacharyya, his wife and son have seen much of the world. They love to

share; their eyes sparkled as they described the awesome experience of seeing the source of the mystic river

Saraswati, named after the goddess of wisdom, and other wonderful sites in the Kedarnath and Badrinath.

At Bheem Pul, a star Badrinath attraction, the Saraswati flows at its full in all its crystal turquoise glory. According to Hindu mythology, Bhim Pul is named after Bhima, who placed a huge rock on the flowing river to serve as a bridge so that their wife, Draupadi, and brothers could cross

over and proceed for their Mahaprasthan. “It is a few feet in length that gives a magnificent view of the Saraswati emerging from the cave and the even more impressive massive handprints of Bhima”.

After visiting Kedarnath and Badrinath, the couple took off for a not-so-frequented place, about three kms from Badrinath. The kindly driver dropped them as close as possible to the destination after which it was a trek “to the Mana village, surrounded by Himalayan hills; the last

Indian village on the Indo-Tibet border, in the district of Chamoli”.

The village and the road were “so scenic” that the couple did not even realize that it was an uphill climb. “The simple villagers mainly engage in farming and only in summer. In winter, they descend to the foothills. They happily helped us to reach our destination.”

The Bhattacharyyas have experienced other crossings; they have seen the Indus too. Experiencing the origin of the Saraswati, however, remains especially close to their hearts.